‘One Tree Hill’ Recap: Every Breath Is A Bomb 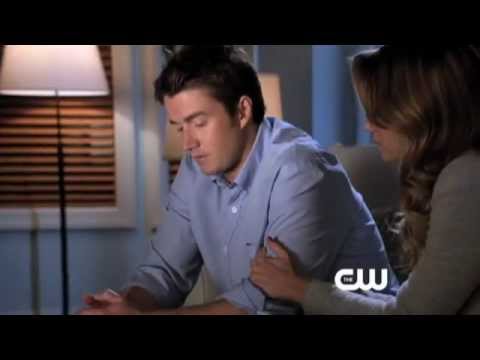 Last night’s episode of One Tree Hill made a lot of the character’s face the truth. Whether it was a truth they weren’t yet ready to come to terms with, I’m looking at you Clay. Or, a truth they already knew deep down. Yep, that would be you Brooke, there was no escaping them. So, lets dig in!

While working at the cafe, Brooke got some visitors courtesy of that lovely manager that I hate Tara over at Tree Hill Cafe. While going to confront her, Brooke got a not-so-pleasant surprise. Xavier was now employed. After sincerely asking Tara not to keep him there because of his violent past, Tara basically told Brooke that the fact that Brooke would be uncomfortable just made the whole scenario even better. Did I mention I hate her?

Understandably, Brooke and Julian went to the cops to try and do something about it, but the cops were super unhelpful. Because he hasn’t done anything illegal, yet, they can’t do anything about it. So, Brooke and Julian embark on a mission to try and catch ‘em in the fact. When what seems like a break in happens, they call 911 only to find that everything checks out. So, now they basically just pissed him off. Xavier confirms this whenhe creepily walks up behind Brooke when she’s leaving the cafe. He tells her he’s just trying to live his life, but she’s making it really difficult. Yeah, not buying it. Especially since the episode ended with Xavier INSIDE Brooke and Julian’s house holding one of the twins. Yep. That happened. Maybe the cops will do something now?

What is it with the cops in Tree Hill? They didn’t do anything about Xavier and clearly aren’t doing anything to help Nathan. He’s still MIA. So, we get one of the most interesting pairings in OTH history: Dan and Haley. Haley goes all Sandy from Grease and seduces Dimitri (who knows where Nathan is) and just as Dimitri thinks he’ s about to ‘hit that’, Dan hits him. Well played, Haley, well played. You know that saying ‘if you play with fire, you’re gonna get burned?’ Well, Dan is taking that kinda literally trying to burn some answers out of Dimitri. But not before Haley gets a good swing in. ‘Atta girl.

Also dealing with some pain, Chuck. He’s scared to speak up because of his dad, but if he doesn’t he knows Chase could go to jail for protecting him. In the end, he showed up as a character witness for Chase at his hearing. The verdict? Chase won’t be flying anymore planes for the Air Force, but he didn’t get a dishonorable discharge either. Hey, you win some you lose some, right?

Which brings us to Clay. After telling Quinn that Surprise! he has a son, Quinn takes it in impressive stride and goes with him to discuss what their next move should be. After a day of playing, Clay works up the courage and tells Logan he’s his dad. Call me crazy, but Logan is what six years old? Dropping a bomb like that should use pictures or something. Not a two minute speech about love, loss, and what the brain does to cope! But then again I guess no matter what age you are there’s really no easy way to say ‘Hi, sorry I’ve been gone for the last six years, my brain erased you when your mom died. ” So E for Effort, Clay. So, in a moment that made your heart melt, he asked Logan if the two of them could be a part of each others’ lives. Then, in a moment that made your heart break, Logan said no. Seriously, tug on my heart strings a little harder OTH.

Do you think of Xavier will get away with being in the house? What do you think will happen with Clay and Logan?